Master of the Mile race results

High-performance race cars, modern road-cars, historic race cars and supercars competed in a time challenge along a 1.6km (1 mile) strip of tar at the Emerald resort & casino. The event offered competitors a challenging high-speed shootout, competing in classes, for a variety of prizes close to half a million rand in value as well as the Master of the Mile competitors competing for the grand prize trip to Las Vegas. 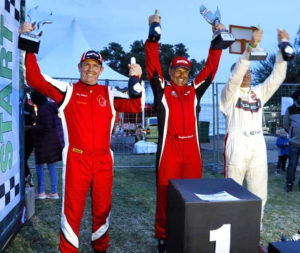 Congratulations to Reghard Roets who was crowned the Master of the Mile at #ESF2020 with an unbeatable rapid 33.869 seconds in his Nissan GTR R35.

Followed by Pieter Zeelie in second place with 34.999 seconds and Franco Scribante in third with 35.044 seconds.

Thank you to all contenders who brought the ESF racetrack to life over the 3 days of motoring action!

Have you got what it takes?

Experience the thrill and excitement of high-performance race cars, modern road-cars, historic race cars and supercars compete in a time challenge along a 1.6km (1 mile) strip of tar at the Emerald Resort & Casino.

Historic racing is one of the fastest growing and most popular forms of motorsport world-wide. The values of original classics have increased dramatically, and many competitors build recreations of iconic race cars.

This is the largest class at ESF. Competitors range from 4-cylinder saloon cars to V8 Supercars.

The winner of the Master of the Mile (fastest recorded time) most likely comes from this category. This class allows for unlimited ‘specials.’ Cars built specifically to race in this type of motorsport event.

This category provides the fewest number of entries however some of the loudest, fastest and most spectacular cars compete in this category.

Master of the Mile